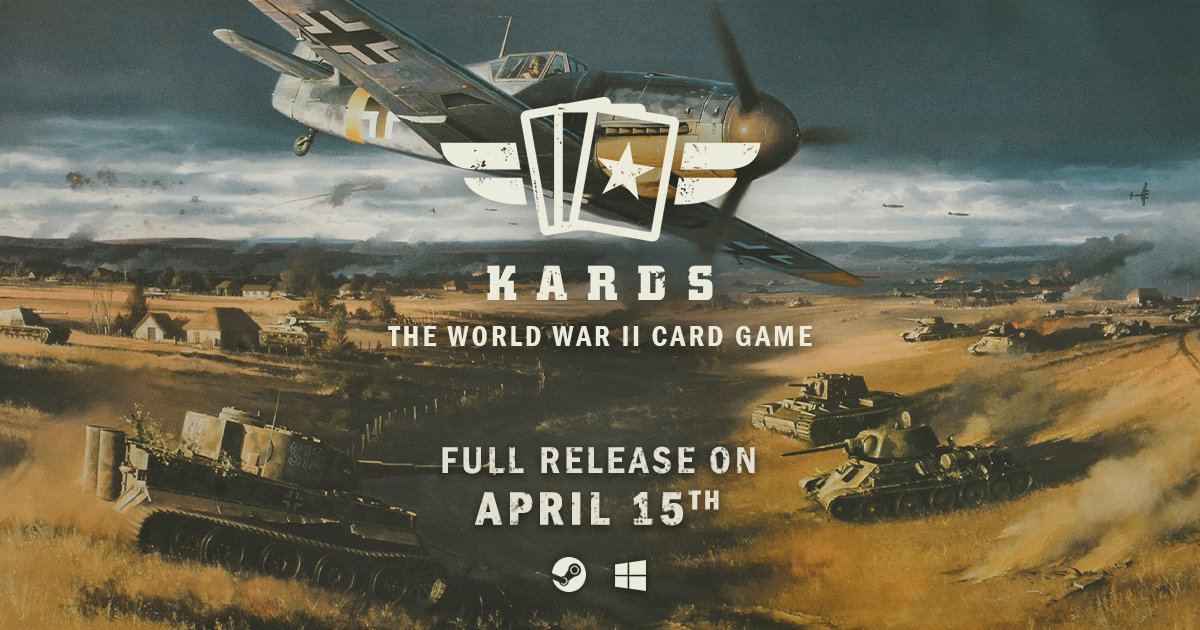 Engage in open PvP warfare against players from around the globe in the WWII themed CCG from 1939 Games.

April 15th 2020, Reykjavik, Iceland - Following 12 months in Early Access and thousands of hours of battle-hardened playtesting, developer 1939 Games today announced that it has officially launched its WWII Digital collectable card game (CCG) KARDS . Providing a battlefield away from the typical high-fantasy setting of many CCG’s, KARDS enables its players to command a diverse range of units from seven of the major Second World War Powers. Players construct their decks from historically accurate infantry, tanks, artillery and aircraft which are then brought to life through period-appropriate art, sound effects and music designed to appeal to CCG fans and history buffs alike.

Created with historical authenticity in mind, KARDS doesn’t just bring a gun to the CCG sword fight. It uses real battlefield tactics to give fresh inspiration to players, such as introducing the innovative ‘Frontline’ mechanic that demands players manage movement and unit range to fight effectively. The frontline enables players to better protect their support assets and takes the battle to their enemy. This creates a huge strategic element to how players play out their individual tactics as well as protect their headquarters. This simple change adds an extra layer of strategy to consider when players are constructing their decks.

Emulating the characteristics of real warring countries from the Second World War, each of KARDS’ seven nations incorporate a range of units to suit every style of play. The British have a strong defensive set to repel invaders, the Germans rely on Blitzkrieg tactics and armour, the US dominates the air and the Japanese project naval power to rule the high seas. Players can mix and match nations to create powerful combination decks as well as raw upon ally support nations such as the French resistance.

With its innovative new gameplay mechanics, hundreds of units and dedication to historical accuracy, KARDS promises to deliver hundreds of hours of exhilarating, strategic gameplay for years to come. During Early Access 1939 Games released a huge expansion that brought two nations and 120 cards to the game. This was just the first of many free expansions that form KARDS’ ongoing development roadmap, future updates will bring additional card packs, tactics and modes to the game, guaranteeing fresh and exciting experiences to novice and veteran players alike. KARDS features:

The draft is open, sign up to join the battle today by downloading KARDS for free on Steam.